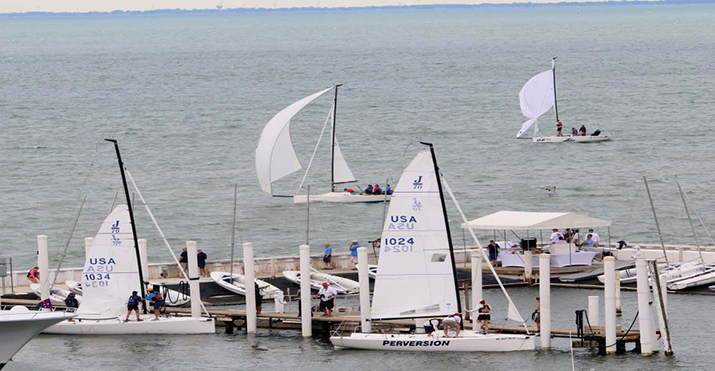 It will change the way you “view” the sport of sailing. Benjamin Klatzka and I have been discussing this concept of sailing in front of Yacht Clubs now for two years. His business is the PSL or Premier Sailing Leauge. His goal is to provide boats around the country in specifi c yachting venues, and create live entertainment in a near-stadium environment that has never been realized for the sport. The goal is to have regional yacht club challenges and eventually crown a national champion.

This past September we decided to try a stadium sailing concept event at the Grosse Pointe Yacht Club in Grosse Pointe Michigan. We had ten J-70’s from the Detroit area divided into four divisions. My goal was to have 18 races in total, with 9 races per team yet all within four hours. Each team would sail two of the four hours then watch and spectate the other two. On the dock we had a grill and bar set up for spectators and participants.

It is my belief that our passion for any sport can only be justified for a shorter period of time than what it takes to do the conventional sailboat race. We have so many demands on our time with family, work and competing sports. I always thought 18 holes of golf would be the maximum time we could set aside for a sport. Yet even at that four to fi ve hour time frame, golf is struggling with participation due the various aspects it takes to play. Interesting that golf also has many of the same participation challenges that sailing has, travel time, actual play time and the cost involved. Stadium sailing is set up to be a four hour experience yet participate for half that time. Importantly, this stadium style event creates a far better ratio of actual racing time to your total hours invested, versus the normal sailboat racing day if sailing from your home yacht club or if on the road for a travel event. That is one of the key goals, to maximize actual racing time relative to the entire time devoted to this sailing pursuit. 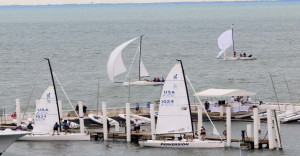 The sailors are the actors on the water and then the ambassadors on land. We will ask all participants to mix in with the audience to explain what is happening on the water, so there is a natural synergy that will evolve with all there to both sail and spectate. This will naturally help grow the sport, which should be a byproduct of this stadium event and thereby foster more participation for a sport challenged to grow. We will have a couple boats miked and a commentator on land. To sail the 18 races, each race has to be between 11 and 13 minutes. There is no down time and practicing is not allowed. Once the first flight completes the

three races the next group has to be ready to go with out any gap in time, thus helping to maximize the actual race time for the sailors. The course has three movable buoys which control a windward-leeward course. The start, fi nish and leeward gate are all the same. The race is four legs and each leg is less than four minutes. The starting sequence is a 3-minute control box on shore and a judge for the line in a RIB inflatable with hailer. We also follow the boats and whistle any fouls. The penalty is a 360-degree turn or a last place fi nish for that race.

This style of sailing will place a premium on quick tactical decisions and boat handling skill and will aid in more rapid improvement in the participants. They will face many more, but similar situations than in the normal one, two or three race day of a traditional sailing event taking an entire day. The goal is to make the racing quick, easy and decisive so you provide near immediate gratifi cation for all competitors and virtually continuous action for the spectators.

In order to run 18 races in four hours the marks have to move a lot. The wind speed and direction will directly affect the time so the marks have to adjust. Based on the fi rst lap time the windward mark will increase or decrease in distance. We are working with a buoy manufacturer that is looking to produce a motorized mark that will be controlled with a smart phone. The mark will lock into a GPS setting unless changed. On top of each buoy will be a Go-Pro style video camera that will wirelessly transmit images back to the sailing center. We will have one person adjusting the course constantly for wind direction and speed to keep the time close to 11 minutes and true to the wind.

We have plans for three events next summer. The fi rst one will be May 20th and will be during out Great Lakes Boating Festival at the Grosse Pointe Yacht Club. This is our in the water boat show that supports the Grosse Pointe Youth Nautical Education Foundation. The mid-summer event will be June 24th and the last one is September 16th. Each event will conclude with awards but at the end of the three event series we will have a grand prize that will be awarded to the top three overall fi nishers.

All the awards will be items the sailors can use to improve their performance. It is my plan to sell sponsor signs on the moving marks, along the sailing wall, on our new sailing center andon the asymmetrical spinnakers. As this concept takes off, it will become easier to secure sponsorship as spectator attendance will grow. The sponsors will get VIP treatment for seating and food/beverage. The Grosse Pointe Yacht Club is building a new sailing center for next spring that will allow many to watch the racing from a balcony and we also plan to bring in bleachers for better viewing.

• Nonstop action for 4 hours; no half time or time outs

• View the leader board and talk to the competitors

• Identify with the teams (all teams will wear jerseys for image)

• On the water judging; one turn penalty

Sponsorship for Stadium Sailing will be important. The sailors and the racing are entertaining the audience. The cost of the event and the awards need to come from sponsorship fi nancial contributions and not from the sailors. Sponsors can have:

• VIP seating on bleachers or balcony

• Signage on boats, sails, buoys and potentially on the sailors jerseys