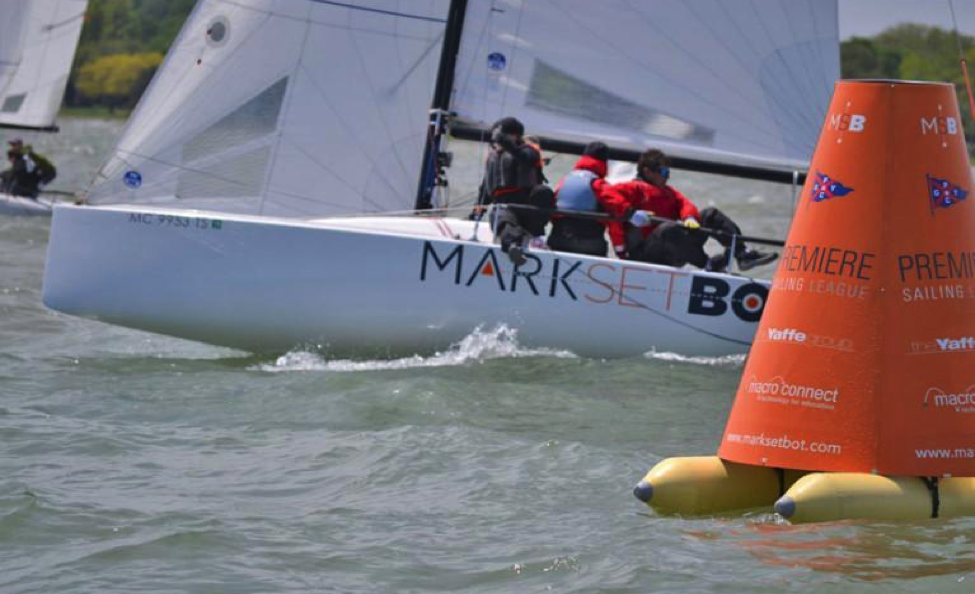 Three automated buoys from MarkSetBot, two operators and one RIB – that’s all you need to run a regatta with a true course every time. The MarkSetBot buoy is changing the management side of yacht racing. Despite heavy reliance on volunteers, many yacht races have significant expenses that are making the events cost prohibitive.

Last week, I read a Scuttlebutt Sailing News article about the village needed to run the Etchells Worlds. The PRO/organizer was proud of all the help which made the regatta a success. However, the cost of travel, hotel and food for more than 20 RC people quickly adds up, and even exceeds the cost of purchasing these automated buoys.

Key West was one of my favorite regattas until it became too expensive to run. Block Island also is one of my must sail events. However, according to Dick Neville, the cost of volunteer help to run all the courses is over $100,000. Not only is the traditional way of running a regatta expensive, it also is slow and rarely perfect. Another drawback is the downtime between races, waiting for courses to be set and reset. When on the water, sailors would rather be racing.

I recently ran a J/70 Stadium Sailing event at the Grosse Pointe Yacht Club in partnership with Benjamin Klatzka, USA president of the Premiere Sailing League (PSL). We teamed up with Kevin Morin, inventor of the MarkSetBot, and ran an all-automated race course using three mobile MarkSetBot marks. PSL intends to use MarkSetBot at all future stadium sailing events.

Three moveable marks can make a windward leeward course complete. The self-propelled MarkSetBot buoy is approximately 6 feet by 4 feet in size and motors at four knots. The Mark’s standard battery has an average life of eight hours, with larger battery options available. Controlled by a smartphone, the buoys move independently, in pairs, or as a group. A course is set by simply pointing the connected phone at the wind or by using wind instruments on the mark to research trends and then set a bearing based on the data. Once set, the MarkSetBot locks on a GPS location and holds position.

We held 18 races at the J/70 Stadium Sailing event with 12 teams in less than three hours. With only a five-minute crash course on using the MarkSetBot app, Benjamin controlled the setting of the marks using a smartphone, moving them independently and as a group. The starting line easily became gates, transitioned to a finish line and then moved back to the starting line for the next race.

The MarkSetBots were put to good use with constant changes to the course based on wind speed and changing wind direction. Just prior to one start, the wind shifted 90 degrees. With a conventional race course, it would have taken up to half an hour to adjust the marks. With MarkSetBot, Benjamin was able to instruct all marks on the course to shift 90 degrees. The complete course was changed in under 60 seconds, and we were ready to race again.

How can you run a regatta with only three marks, two people and one boat?

If you are interested in the history behind MarkSetBot, Kevin Morin conceptualized the automated buoys while racing on Cass Lake at the Pontiac Yacht Club. This inland lake is

to say the least, and race committee work is a nonstop job. Often, courses are set less than perfect just to get races going.

This new technology eliminates some of the challenges faced by race committees in locations where the wind is shifty, volunteers are scarce, or the water is too deep to set an anchor. These issues often force them to set a course that is less than ideal or, sometimes, cancel racing entirely.

Our world is changing fast with new innovations. Just as cars will soon be able to drive without a person steering, buoys for sailboat races can be autonomous too. I’m thrilled about this new technology which will result in better races and eliminate the waste of both money and time.