Wing and Wing, it is in the Math 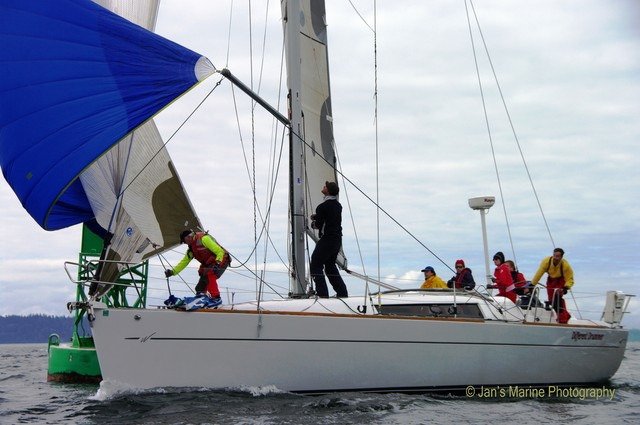 Racing the J 70 is always fun. This class has evolved to be a great boat for all ages and level of sailors. At a variety of regattas this past winter some of the boats made gains sailing Wing and Wing off the wind. This boat usually sails with both sails on the same side in light and planning conditions, yet we found in the moderate conditions the VMG was better sailing Wing and Wing.

Yes indeed OH BACK IN THE DAY!!!! The math is simple “actually”‐ Draw a straight line from windward mark to leeward mark with a distance “d”. Let’s say it is 2 miles, so DDW if you travel at 2miles/hr it takes 1 hour to get there, easy? Yes.

Now consider one or more gybes on a downwind leg. You can go out on, let’s say starboard gybe and head to point “a” on the layline to the leward mark. When you gybe on to port, you’ll arrive at the leeward mark in twice the time it took you to get to “a”. If you draw a line from point “a” perpendicular to line “d”, it intersects on line “d” at the halfway point between W and L marks, let’s call that line “a‐d”.

If you go back to W mark‐proceed DDW down line “d” to the intersection of “a‐d” and make a 90° turn, you will get to point “a”. The route you took on the gybing sail was the hypotenuse of a right triangle (ddw to intersection of “a‐d” and right turn to “a”. So the question is how much longer is two times the length of the hypotenuse, compared to “a”. So if it is 10% longer, then you have to travel 10% faster gybing then DDW to get to L at the SAME time.

The narrower the gybe angle, the less difference in length of “d” is two times the hypotenuse. In standard (your kid will know this) trigonometry, the Cosine of the (gybe) angle is the ratio of adjacent/hypotenuse of the right triangle. So if you take the gybe angle let’s say is 160 (ie 20° off of DDW) the cosine of the angle (see table on google) is .94, so you are travelling 6% longer distance down the hypotenuse than DDW so you have to travel 6% faster on the gybing route than the DDW route to be a wash.

For a gybe angle of 30° you have to go 14% faster, or to put it your way if you sail DDW you can go 14% slower and get to the L mark at same time as a gybing route. Since you do not have a Cosine table on board and downwind speeds are dependent on wind speed etc. I have developed a “RULE OF THUMB” for quicker on the water application.

My “RULE OF THUMB” is that in a keel boat you go about 13 Kts. at about a 25° angle makes the speed difference 10% for a wash, or 1.3 Kts. slower. A wash is not worth the fuss so if the RULE OF THUMB is 1 Kt. slower for Wing on Wing will get you to the L mark faster. The other useful “RULE OF THUMB” is simply asking if it is worth sailing higher to go faster when going downwind. Since at standard downwind angles are between 20° and 30°, the Cosine table says that at these angles a 10° difference is about 10% change in distance. If you sail 10° higher, you have to go 10% faster to have a wash. So look at the speedo, get your speed, look at your compass and get a heading. Try a 10% higher angle and see if you go more than 10% faster, then you’ll have a better VMC. Similarly, if you are sailing normal downwind, try Wing and Wing and see if you are going less than 10% slower.

I know sailing at the recent St. Petersburg event, we thought if the speed only dropped .5 to .7 knots and allowed us to sail almost 30° lower it was a big gain (this supports Malcom’s 10% theory).

Sailing Wing and Wing is very different than sailing with apparent wind speed on a proper gybe. Once the boat sails lower the extra apparent wind speed goes away and then the main crosses just enough to have each sail on opposite sides. It feels more like a pushing wind (apparent wind speed changes to true wind speed) and the helmsman has to make small helm corrections. The leech of the asymmetrical spinnaker now acts like the luff. We found using the masthead Windex was extremely helpful.

I do think the solution is in the math and with the new apps on the phone the process can be simplified. Motion X seems to be a good GPS tool on the smart phone and if you can save a waypoint in the vicinity of the gate your VMG can be displayed after rounding the top mark. https://www.motionx.com/

Ultimately, however you decide to sail off the wind, consider all the options. On most boats you will rely on your target True Wind Angle as your guide to be competitive. On some boats with asymmetrical spinnakers there will be times in the mid‐wind speeds that sailing Wing and Wing will be the fastest option.